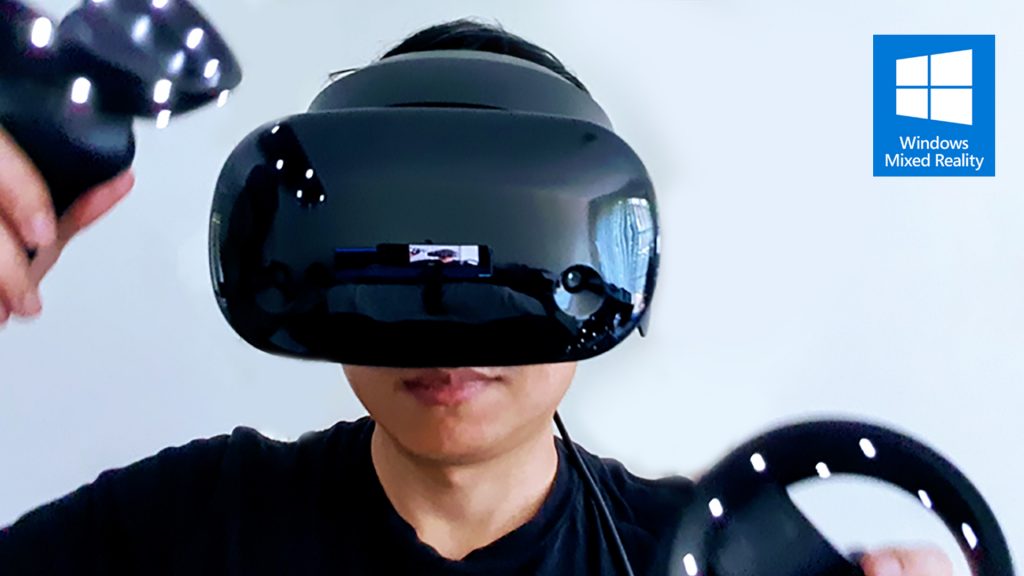 First, I’d like to emphasize that this review focuses on the user experience of the Samsung HMD Odyssey and Windows Mixed Reality as its system. This is not a pure tech review.

What is a Windows Mixed Reality (WMR) headset?

The WMR Mixed Reality term was coined as a marketing jargon for Microsoft’s new breed of Virtual Reality headsets. These are new Original Equipment Manufacturer (OEM) VR headsets ranging from Acer, Dell, HP, Lenovo and Samsung with others upcoming, supported by Microsoft Windows and their Mixed Reality development team. It’s a VR headset with a little bit of Microsoft Hololens technology built into it.

I’m not going into the nitty-gritty details of its product specifications. You can have a read on Samsung’s product page including its price point. It is more consumer-friendly compared to the Oculus Rift or HTC VIVE which are selling at a higher price.

In short, it is a nice VR headset with AMOLED screens at 1600x1440px resolution for each eye. The headset and lenses provide us with 110º field of view and has with front facing cameras to track the controllers and scan the room. It also includes two controllers with LED tracking dots on their crown.

It is the highest resolution consumer VR headset in the market at the time this is written.

The design is great, it looks slick and more appealing than other OEM devices.

Setting up was easy, with only one cable coming out from the headset to the PC. The play area set up and controllers Bluetooth syncing with the PC were a breeze too. You will need to be running Windows 10 with the creators' update (currently the latest version of Windows).  Windows Mixed Reality software also needs to be downloaded but that doesn’t take that long. Once they are all installed with the headset plugged in, there’s nothing else we need to do. You are ready to use the VR headset.

Compared to HTC VIVE, the cable is quite short and suitable for a 2 - 3m² interactive space. It does have a nice cable that splits to HDMI and USB 3+ at the back.

The headset is really comfy with nice soft faux leather around the eyes.
The head strap tightening mechanic is similar to Playstation VR and Hololens. Rotate a wheel at the back to tighten the head strap, making it super simple to put on and take off.

One good thing about this adjustment mechanism is that it allows people with glasses to use the headset. It’s quite light compared to HTC Vive despite it being the heaviest in the range of WMR headsets.

Samsung Odyssey adopted Hololens style of tracking the play area and the controllers called inside-out tracking. However, it seems to be hit and miss as we discuss further in the review.

Gorgeous 1600x1400px resolution for each screen. The lenses in front of the screen are also refined to a state where we can’t see any concentric circles.

This really made the headset shine. Everything looks crisp with the higher resolution. Text in the user interface is legible and very easy to read, 3D environment textures with text can also be read easily. It really does make a big difference as the pixels just disappear and our eyes get used to the environment faster. This is the biggest selling point of this headset.

This can only be matched by the announced HTC Vive Pro that is coming later this year.

I can’t really review the sound quality as I’m not a certified audiophile, but from a regular perspective they’re great, however not as adjustable as I’d like them to be. They have a minor circular movement, but it can’t be extended or retracted, so it may not fit  everyone’s head well. Having a built-in headphone is always a good thing because it’s less fussy cables to deal with. However, if it’s not that adjustable, it’s better to just have 3.5mm headphone jack to use your own headphones or earphones.

One flaw of the design is the LED lights that are on the crown of the controller, when they’re not used, they’re blindingly bright. When they’re seen by the headset, they’re dimmer.

The Software or WMR System

This is where Samsung Odyssey and other WMR products fall short.

If you’ve used Hololens before, this application feels familiar. The User Interface is similar to Hololens, the environment is gorgeous and the control uses standard VR patterns like teleportation and boundary detections.

Installation is straight forward and when we put on the headset or turn on the controllers the WMR app opens automatically and puts you into the “Home” or the dashboard to access all of your apps in VR.

Games and apps can be bought and downloaded from the Windows Store and Steam. The new ones are built with Universal Windows Platform (UWP) technology and should be available for the Xbox One platform as well. This creates an interesting theory that in the future Xbox may be able to use WMR headset to play VR games, especially now that project Scorpio has been released. Currently the most powerful console on the market.

I was ready to go and try out a few games available from the STEAM store. Then the issues started to arise as I was expecting that it would just work.

On STEAM we need to download Windows Mixed Reality for SteamVR app that becomes a bridge between any WMR device and STEAM. Not a big deal at first but then I realize that my machine gets a bit confused on which app is the priority as there are two VR environments running at the same time.

Some Steam games and apps work fine with the Odyssey but if they go out of sync they’ll go to a state where it’s unplayable. Some issues I experienced: wrong floor height, dipping in or out of game and losing controller tracking. I’m sure with time it’s going to be a lot better when WMR for SteamVR app (the bridge) is updated, however it locks us into the Windows store if a user wants a seamless experience, and this will be an ongoing struggle for a consumer who has WMR headsets. Their VR library is getting fragmented across multiple marketplaces.

Games look great on the Odyssey’s screens. They run well too with a good PC setup.
As mentioned before, compatibility can be an issue where games dip in and out of the applications because there are two environments running at the same time, WMR and Steam VR apps.

Standing and room scale VR games work well when they’re optimised for WMR, the easiest way to recognise if they have the WMR symbol in the library. If not then the controllers will be in the shape of Vive’s controllers and they may have a minor bounding box issue in the game. This will cause users to misjudge the distance of objects when they’re trying to grab them in game.

Similar to VR games the quality of the screen makes the colour pop, it’s vivid and enjoyable to watch. The AKG headphones make the surround sound work to a degree. Either the apps haven’t been designed with  full surround sound or not implemented at the software level to make me hear full surround sound not just stereo.

Room Scale or Sitting Down

Both interactivity is acceptable, with the room scale experience being slightly smaller than the Vive’s due to cable length. WMR software is also slightly behind the Vive’s with the boundary detection needing to be improved. I was hoping that it would detect like Hololens does, scanning the room and remembering where the tables, chairs and walls are, but it doesn’t do so or it’s just not there yet.

HTC Vive uses its headset cameras to display a rough outline of the real world so you won’t run into walls or furniture, it’s a handy tool to have in a limited play area. Odyssey doesn’t do this yet so occasionally I would knock the controllers on my PC desk or a nearby chair.

Worth noting that if you set your play area boundaries, don’t go too close to the furniture or walls, keep a good margin from them during setup.

During the time I’ve tested the Odyssey, I have had mixed results on this due to the software or the individual games level of optimisation.

The reliability of its tracking is a major issue that Windows Mixed Reality developers need to focus on. Since the headset only sees the controllers in front and not the back, sometimes the controllers’ virtual representation smack you on the face when it’s behind the headset or underneath when it loses track of them.

It’s a bad user experience as it’s really distracting for the user. Some games like SPARC by CCP need  accurate tracking and become almost unplayable due to network lag and subpar tracking over a complete range of motion.

This is where HTC Vive’s outside-in tracking wins. By use of its base stations it tracks the controllers and the headset in the space, independent from each other.

I’m hoping that in the future, Microsoft will update their range of Mixed Reality headsets with the help of the PC’s webcam to track the controllers behind the headset and let the player face away from the PC.

This is the first generation of Windows Mixed Reality headsets and they need to impress the market. The Odyssey impressed me from hardware quality, however it needs to improve on the user experience quickly, by updating its software to fix controllers tracking issues and its WMR system’s compatibility with different games or apps. If it doesn’t  it will just be forgotten as the market will prefer something that is more expensive but has better compatibility with current games or apps and better room scale tracking.

If you have the same headset let me know what you think about it, your experience with it and if it meets your expectations.