The Evolution of Virtual Reality 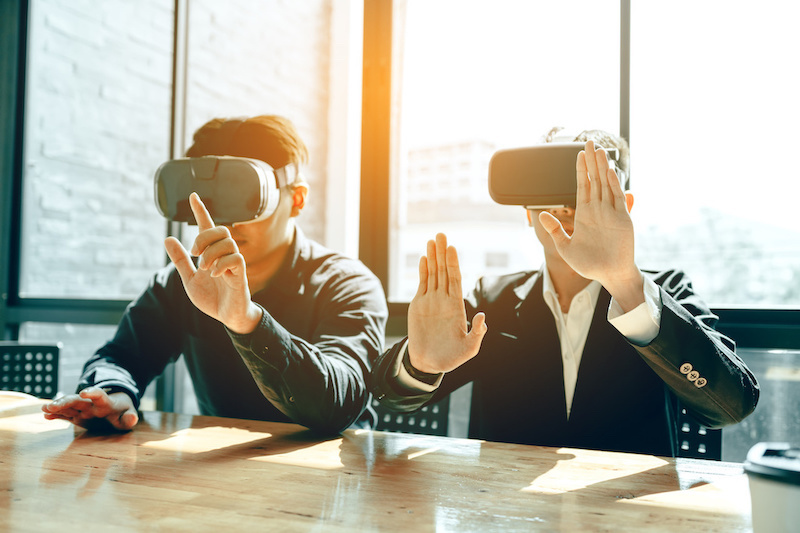 The term "VR" has become increasingly popular in recent years, but what does it really mean? In the 21st century, VR typically refers to computer-generated imagery and hardware that provide enhanced sights and sounds to viewers in a superficially immersive manner.

Although it's hard to determine the exact origins of Virtual Reality because of how difficult it is to formulate a definition for the concept of alternative existence, some people say that VR was first created in Renaissance Europe. This is because there were depictions of spaces that didn't exist, which were referred to as "multiplication of artificial worlds". However, others state that some elements of virtual reality first appeared in the 1860s. A more modern concept of Virtual Reality is said to have come from science fiction.

If we want to understand VR in a historical context, we have to broaden our definition of what VR is or what is VR-adjacent. This means that we may not only be discussing about the VR technologies that have been branched into many different directions, but also older forms of media. Over the years, mankind has been slowly but surely creating ever richer ways to stimulate our senses. Things really began to take off in the 20th century with the advancement of electronics and computer technology.

A group of visionaries in the 1950s believed in the possibility of viewing images on a screen without boundaries. However, technology at the time was limited, and the development of still images was in its early stages. As a result, the VR concept remained a dream for many years. In 1962, Mort Heilig patented the Sensorama, which was a cabinet with a 3D display, vibrating seat and scent producer. This was the closest thing to VR technology at the time.

As personal computers became more accessible in the 1980s and 1990s, a small group of inventors began to explore the concept of virtual reality again after it had been "abandoned" for almost three decades. Hollywood began to use computer-generated special effects in many of its biggest blockbusters, giving viewers a new experience in the cinema.

While arcade headsets, gloves equipped with motion sensors, and full-body motion tracking suits had been released, they were still not able to use those technologies to achieve a vision for virtual reality. Users could experience a rough version of an alternative reality, but the actual experience and concept were far from achievable. It was also costly, both in terms of time and money.

Next Level of VR

VR is typically said to have an "interactive" property in its definition, which differentiates it from other forms of media like 3D movies or 360-degree videos. However, there are plenty of computer-generated VR experiences that aren't interactive but are still considered VR. 360-degree videos might not be computer generated, but their functionality is similar to that of a pre-planned, non-interactive CG VR experience.

Virtual reality is the next big thing, and Facebook's acquisition of Oculus has solidified that. The Oculus Rift headset is the latest and greatest in VR technology, and it's here to stay. Palmer Luckey, the mastermind behind the development of Oculus, has achieved what many have been trying to do for decades - create a virtual reality experience that is actually believable and immersive. Oculus is finally able to give users the proper VR experience they've been dreaming of. In addition, researcher Albert Rizzo has been using virtual reality to help treat cognitive and motor illnesses - proving that VR technology has many applications.

The Future of VR

VR has a ton of potential applications and has already been used in many different industries, such as gaming, education, architectural design, military training, and psychological treatments. Recently, there has been more evidence of VR application in several research areas, such as science, education, training, physical training, travel, meetings, news and entertainment. However, while VR does have many advantages, there are also some potential weaknesses that should be considered before using VR in any given situation.

In addition to the previously mentioned study, VR's effects on mental health was further explored this year by Freeman et al. (2017). The study found VR to be an effective assessment and treatment for psychological disorders such as anxiety, schizophrenia, depression, and eating disorders. VR gives us the ability to cross boundaries that would normally be impossible, making it a powerful tool in the mental health field.

Virtual reality is one of the most promising technologies for growth. According to the latest forecasts from IDC Research (2018), investment in VR and AR will multiply 21-fold over the next four years, reaching 15.5 billion euros by 2022. This technology has the potential to change the way we live, work, and play.

The market is now shifting to demand applications that serve a purpose beyond leisure, tourism, or marketing. Additionally, these applications need to be more affordable for users. The virtual user experience also needs to be improved to avoid common defects, such as clipping, which happens when certain solid objects appear as though they can be passed through. Additionally, the negative side-effects that VR produces must be minimized, such as motion sickness, which is a dizziness induced by the mismatch between the movement of our body and what is being seen in the virtual world through the VR headset. Big tech companies are already developing a new generation of headsets that don't require cables and offer images in true high definition. This could become the new standard, allowing more devices with larger users to be connected.

Despite Google's release of the Cardboard back in 2014, it still has its limitations when it comes to providing users with a virtual reality experience due to smartphones not being able to produce the necessary output. The Cardboard is a low cost DIY stereoscopic viewer that is made to be used with smartphones, but the latter will only be able to provide a functional experience and not a truly immersive one.

By 2016, hundreds of companies had developed VR headsets, most of which had dynamic binaural audio. Haptic interfaces, or systems that allow humans to interact with a computer using touch and movement, were underdeveloped. For example, the Glove one gloves that were being developed. This meant that handsets were typically button-operated.

VR is an industry that is constantly changing and evolving. lately, we've seen a huge shift in the technology being used in standalone VR headsets - they are now more sophisticated than ever before. The Oculus Quest has received a lot of promise in recent months for its tethering capability, while smartphone-based VR projects are slowly being abandoned. This is likely because the cost of VR headsets has dropped dramatically, making it more accessible to the average person, and because computer hardware that is capable of running these headsets is now easily accessible. As a result, many advanced headsets are coming to the surface. Varifocal technology, which provides an extremely wide field of view, hand scanning and eye tracking are just a few of the key developments in modern day virtual reality. Major companies such as Apple are rumoured to be working on such projects, which suggests that VR is likely to become a part of everyday life in the future.

Virtual reality has the potential to shape the future in a number of ways, not just through its use in science fiction.

Find out more on the evolution of Virtual Reality and the VR we created.