Beginners Guide to VR and Which Headset You Should Buy 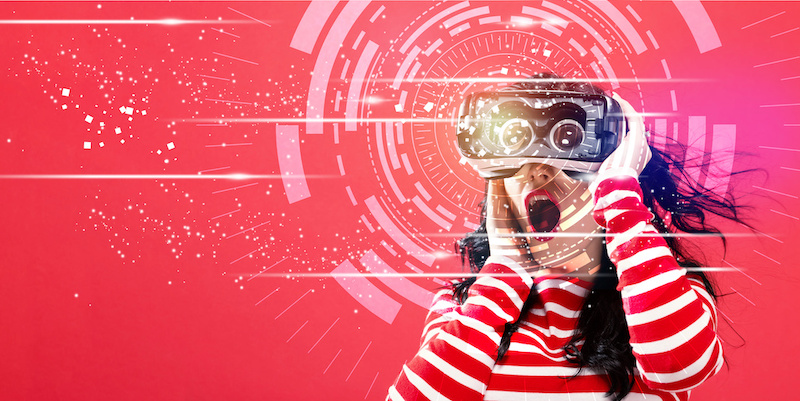 Virtual reality allows people to be fully immersed in a digitally enhanced environment. The most common method to experience it is using ahead-mounted hardware that is able to track your movements. The VR headsets consist of a screen (some have separate screen for each eye) housed in a frame(or headset) strapped to your head. A pair of lenses are typically fixed between the panels and your eyes, blocking the view of the outside world, to make it appear that you're currently seeing through the headset to an entire new world.

In some headsets, you are able to control or select things within the simulated environment and interact with the virtual world. There's a controller that can be used in each hand to control aspects of the experience. In some cases, the controllers deliver virtual representations of your hands to manipulate the environment and objects within it in ways similar to the real world.

The modern age of virtual reality began when Palmer Luckey created the first prototype of a VR headset, which then would become the Oculus Rift. This triggers the reborn of tech industry’s interest in VR. Afterwards, Facebook’s CEO, Mark Zuckerberg, bought the company for 2 billion dollars a couple of years later. Since then, there have been several competitors emerging, such as HTC Vive, HP Reverb, Valve, Acer, Pico, Sony’s PlayStation VR to smartphone-powered headsets such as the do-it-yourself Google Cardboard. At the same time, numerous developers are making VR games and apps, filmmakers are exploring the potential of motion pictures for documentaries and animation, and even Facebook and YouTube have provided plenty of 360-degree videos.

The most important piece of equipment to get yourself into the world of virtual reality, is the VR headset. The higher quality headsets are needed to be plugged into a computer to run the apps or games, while the cheaper headsets use a smartphone in the front of the headset. There is also the middle ground where you can purchase  stand-alone, untethered headsets, which may or may not be able to plugged into a PC or similar to improve their stand alone performance.

Next, the headset needs a good quality pair of headphones, though on higher end headsets these are built in as part of the VR headset itself. You may also need hand controllers as an interaction tool inside whichever VR game or VR application you’re using, although standard gaming joypads can also be used.

VR devices also have their own app stores. These app stores are where you can browse and download the games and apps that interest you. Some of these stores are only accessible by using the device itself, while others can be browsed through your computer.

Now that we have established the basic needs of a VR headset, what should you look in a VR headset? The answer to this is it depends on many factors, including things such as cost, mobility, e.g. whether the headset needs to be connected to a PC or a stand-alone, what activities do you plan to do wit the headset.

Which VR Headsets to Buy?

Technically, the right choice depends on what you want to do in virtual reality. Most common VR applications are games and fitness. You still have to decide whether you want a headset that is connected to your PC or console, or a stand-alone headset that can function as a PC headset or cheaper headsets that require a smartphone.

VR headsets that use your smartphone such as Google Cardboard or the Samsung Gear VR, let anyone with a compatible phone to get a VR experience for under $150. However, these smartphone headsets have slowed to almost a halt. Also, Google has discontinued its Daydream View headset and Samsung has discontinued the Gear VR. This translates to the support for the almost none. For now, phone-based VR is effectively dead.

Below are some of the known VR headsets for your consideration:

This is one of the high-end headset. It is wireless, equipped with powerful processor and sharp display, very accurate motion tracking. Although we've mentioned wireless, there's an accessory cable that you can use to connect it to a PC. However, this headset has a short battery life.
‍

This headset offers an immersive VR experience due to the support of its motion control. Although Sony has already have a large library of VR games, it can be used with non-VR apps and games. However, the headset only works with Playstation 4 and Playstation 5. It also requires the Playstation Camera which is sold separately.

It is a revolutionary VR headset due to its finger-tracking controllers. This headset has a high refresh rate with smooth motion and there are plenty of VR apps available via SteamVR. However, this will cost you almost a thousand dollars.

If you want the best VR experience available, this is the headset to buy. It has the best resolution for VR gaming with smooth motion tracking. Additionally, it works well with Valve Index controllers. Simply put, it has an amazing visuals and controls. However, it'll cost you more than a thousand dollars, excluding price for the PC which is  required (to a sufficient specification) to enjoy the headset's maximum power.

This is a comfortable headset and controllers that works reliably with SteamVR. It is a more affordable headset than the Valve Index with the same high resolution for each eye. However, the camera-based tracking is known to have occasional hiccups. Not to mentions that it's much more expensive than the Oculus Quest 2.

Those are some of the VR headsets that you can consider to buying. Please take a note that whichever headset you choose, motion sickness might happen. You should spend some time first to getting used to it. Try not to use it for too long at first, maybe 15 min at a time -Please don’t make yourself sick!

Should you want to get started with Virtual Reality we hope that this article has helped you with some of the differences and decisions you need to make when choosing a headset.

Contact us now to find our more on guide to Virtual Reality.