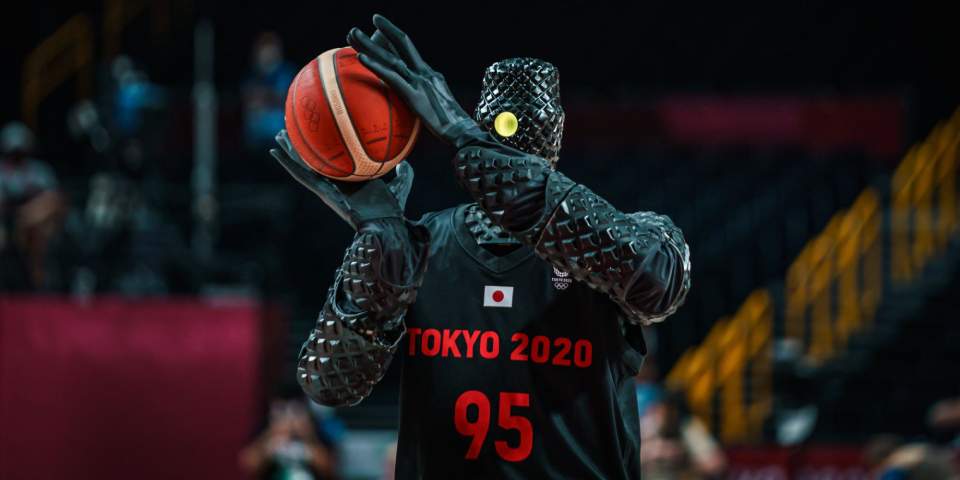 We've come a long way since the Olympic games were first invented by the Ancient Greeks, and it's even more clear when we factor in the incredible advancements in technology not just in the Olympics, but in the world of sports in general. Particularly when it comes to robot technology. The development of AI machines that can also participate in our human-designed activities is an incredible thing to behold, so keep reading to discover some notable developments!

Riding on the wave of the Olympics, the Japanese auto manufacturer giant Toyota showcased their robot that can throw basketballs through a hoop with almost perfect accuracy. The AI basketball robot is named CUE3, and is the 3rd generation of the CUE robot development. It stands at 204cm tall, weighs 76kg, and wears a jersey with the number 93. The half-time show of the USA and France basketball game was CUE3's time to shine. It made three consecutive shots, each of which were at different distances from the hoop, and all worth three-pointers. You might be asking, "What's so impressive about that? Isn't it just a repetitive motion?" Well, yes and no. It is the repetitive motion of throwing a basketball into a hoop, but doing successfully scoring consecutively with the added variations in distance is what is impressive. According to Toyota:

"For a humanoid robot to throw a basketball, a variety of technological problems must be overcome. For example, the trajectory of the ball changes according to how the ball is placed in and how it leaves the robot's hand; the force of each throw results in minor changes to the robot's position; and, even when attempting to throw an identical shot, the supply current and power is liable to change."

As evidenced, this was no small feat. Additionally, in commemoration of the 2020 Olympics, CUE3 was set a goal to score 2020 consecutive basketball free throws. Yes, you read that correctly - two thousand and twenty consecutive free throws. With CUE3 able to make an accurate shot every twelve seconds, this goal was achieved in around six and a half hours. Even more significantly, this set a brand new world record. Guinness World Records crowned CUE3 with the title of 'Most consecutive basketball free throws by a humanoid robot (assisted) ― 2,020.'

Another spectator sport that robot technology is exploring is soccer. But unlike the current landscape for basketball, you can watch robots actually play the sport.

RoboCup is the shortened name for the Robot Soccer World Cup. It is a soccer tournament that features different robot teams competing against each other. The robots must be fully autonomous; as soon as the game starts, no input from humans are permitted beyond the referee. RoboCup has five leagues, with each taking on different robot configurations: Humanoid, Standard Platform, Middle Size, Small Size, and Simulation. Standard Platform is one of the most recognizable leagues of robot soccer, featuring teams of small humanoid figures. This league requires teams to use the same robot standard - the NAO robot from SoftBank Robotics. They are still required to play autonomously, but must rely on communication and working together as a team in order to be successful. The games are slower-paced compared to the Small Size and Medium Size leagues, but this is due to the additional challenges that the humanoid design taken on. According to the RoboCup organization, "Dynamic walking, running, and kicking the ball while maintaining balance, visual perception of the ball, other players, and the field, self-localization, and team play are among the many research issues investigated in the Humanoid League."

Beyond creating great entertainment, the purpose of the RoboCup is to promote research in AI and robotics. They also have a clear goal for their initiative:

"By the middle of the 21st century, a team of fully autonomous humanoid robot soccer players shall win a soccer game, complying with the official rules of FIFA, against the winner of the most recent World Cup."

The next robot technology is created by none other than Boston Dynamics, a company that is behind many viral video sensations that showcase different robots doing (or at least attempting) human activities. In terms of sporting, one specific robot named Atlas can perform gymnastics and parkour. It is capable of performing a routine complete with a handstand roll, somersaults, a split leap, and a full 360-degree spin. Atlas uses its whole body in an impressive display of dynamic motions and balance. Boston Dynamic states that Atlas is 'The world’s most dynamic humanoid robot', and they meant it when they say dynamic. The movements that Atlas is capable of is a result of the hardware that allows advanced mobility and agility, which translates to the robot being capable of human-like motions. This is displayed in the range of videos that shows Atlas performing elaborate dance routines and parkour tricks.

Boston Dynamics is an engineering and robotics company that focuses on innovating technology in order to "create exceptional robots that enrich people’s lives." The research that has been invested into robotics has been focused on building machines that can help physical work processes such as lifting and moving objects, but a robot like Atlas shows how research in this area for one purpose typically leads to innovative applications in other areas - even if it is entertainment!

Robotic technology has been applied to the wide world of sports, and perhaps soon we'll be able to watch teams of this technology battle it out in their own version of the Olympics. Just as Boston Dynamics' use of research has shown, we're sure that developments in this area will have a wide range of applications and we’re excited to see what else we'll discover along the way!